The Magpies got their 2022/23 Premier League campaign off a winning start with a commanding victory against newly-promoted Nottingham Forest at St. James' Park.

Fabian Schär and Callum Wilson were on target as Newcastle carried on where they left off last term, and in a largely encouraging pre-season campaign.

Schär and Dan Burn were chosen to play in the centre of defence ahead of summer signing Sven Botman and captain Jamaal Lascelles, and justified the call by helping debutant goalkeeper Nick Pope keep a clean sheet.

And Schär provided crucial contributions at both ends of the pitch, as he made a goal-saving block from Jesse Lingard in the first half before scoring United's first goal of the new campaign in spectacular fashion in the second.

Wilson made sure of a thoroughly deserved victory late on as United dominated throughout, pressing high and monopolising possession, as well as forcing 11 corners and taking 23 shots during the match.

Joe Willock had a shot deflected wide inside the opening four minutes before Joelinton saw an effort parried away by Dean Henderson.

In the 27th minute, Miguel Almirón stood up an inviting cross which Allan Saint-Maximin almost forced home but Forest were able to scramble the ball clear, but only as far as Bruno Guimarães; however, his shot from the edge of the box was off target.

Five minutes later, Joelinton - last term's player of the season - almost made an early claim for the goal of the season award in only the first game as he ghosted past three challenges but dragged his shot just wide. Then seconds later, the same player sent a shot straight into the arms of Henderson.

United continued to force the issue, and in the 35th minute Willock's left-wing cross was met by the head of Wilson, but he couldn't direct it far enough away from the goalkeeper.

And two minutes later, Saint-Maximin cut inside and let fly but again, it was straight down the throat of Henderson.

Forest finally mustered an opening in the 39th minute, with Schär making a big block to deny Lingard before Neco Williams shot wide from the loose ball.

But it was Newcastle who ended the half on top as Guimarães found Almirón scampering into the box and the Paraguayan's effort from a tight angle would have squeezed in at the near post but for an important intervention from Henderson.

At the beginning of the second half, more United pressure resulted in Kieran Tripper whipping in a low cross which Saint-Maximin just failed to connect with at the far post.

Howe's men kept on coming and Willock was denied by Henderson before, moments later, Almirón played in Saint-Maximin but Scott McKenna appeared from nowhere to make a superb block.

There was nothing he or his goalkeeper could do to prevent Schär from finally breaking the deadlock just before the hour mark, though, as the Swiss defender let fly from 22 yards, with his shot beyond Henderson in an instant as it nestled in the Leazes End net and sent St. James' into raptures.

Sam Surridge - who played under Eddie Howe for previous club AFC Bournemouth - sent a diving header wide from Williams' right-wing centre but in the 77th minute Newcastle came close to doubling their lead as Almirón burst through but Henderson got down to smother his shot.

It was 2-0 seconds later, though. Joelinton fizzed the ball across the box and Wilson's clever touch sent it looping beyond Henderson to open his account for the campaign - and give United a winning start, with Saint-Maximin and Wilson both missing opportunities to give the scoreline an even more convincing feel, while there was a stoppage time debut for Botman to cap an excellent afternoon for the Magpies.

Nick Pope reflects on trendsetting display as he shuts out Seagulls

Back to Newcastle United
See Nottingham Forest Line up 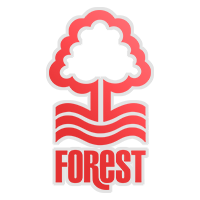