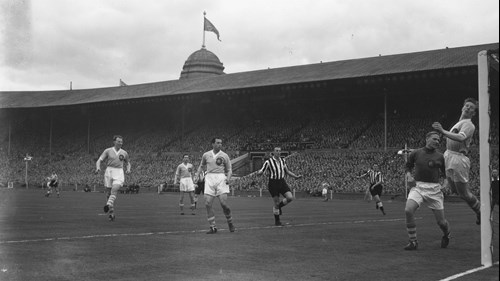 After a marathon nine-match run, including four replays, United - led by warhorse Jimmy Scoular - finally lined up against Manchester City under Wembley's famous Twin Towers in May.

And after just 45 seconds, the travelling masses from Tyneside were roaring as Jackie Milburn rose at the near post to nod home a Len White corner - scoring the fastest goal ever in a Wembley Cup Final (a record finally surpassed in 1997).

City were even more up against it when right-back Jimmy Meadows twisted his knee. Coming in the days before substitutes, it left his side with ten men.

Despite their lesser numbers, City equalised on the stroke of half-time when Bobby Johnstone sent a superb diving header into the back of United's net.

Driven on by the redoubtable Scoular, the Magpies went all out for victory but faced a formidable obstacle in City’s famous German goalkeeper, Bert Trautmann.

Trautmann had pulled off a string of great saves but was finally beaten when White set up Bobby Mitchell to control and score from a narrow angle at the far post.

Mitchell then turned provider, passing to George Hannah who smashed in a third, sealing another great Wembley triumph for United's Cup Kings. 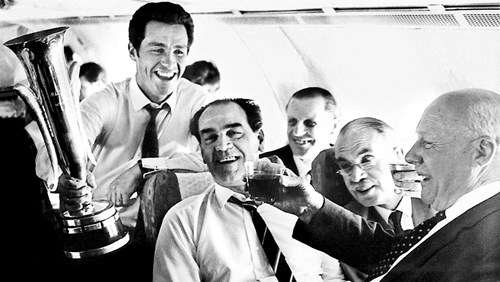 In Newcastle United’s first-season in Europe, the odds against them lifting the Inter-Cities Fairs Cup were around 1,000-1 at the outset.

Hailing from Hungary, home of the Mighty Magyars of the 1950s, Ujpest were rightly regarded as formidable opponents.

After seeing off Don Revie's Leeds United at an earlier stage of the competition without conceding, they were thought to be near-invincible - until Joe Harvey’s heroes got at them.

After a goalless first half in front of a near 60,000 full-house in the first leg at St. James’ Park, skipper Bob Moncur made a dramatic contribution, scoring twice - first from close range, then from long distance.

“I rarely joined the attack in those days, but we needed a goal so I went upfield,” said Moncur.

“The first goal came after Wyn Davies had a shot saved and I squeezed in the rebound, then the second came from around the edge of the box with a low shot.

“Ujpest were rocked by the goals," Moncur added, "And Jimmy Scott got a third one close to the end to put us in a strong position for the second leg. But there was still work to do.”

Ujpest, with greats such as Ferenc Bene and Antal Dunai in their ranks, came at United from the start in the return leg in Budapest.

When Bene and János Göröcs scored in the final 15 minutes of the first half, the Hungarian heavyweights had United on the ropes.

“But Joe told us at half-time that if we could score, Ujpest would collapse,” recalls Moncur. “We did score, and Joe was proved right.”

Indeed, in the first minute of the second half the the 'miracle' stories were being written again when Moncur volleyed a match-turning goal from a half-cleared corner. Ujpest buckled.

Danish midfielder Benny Arentoft hammered in a tremendous second to level the scores on the night before young substitute Alan Foggon raced clear, lifted a shot against the bar, and drilled home the rebound to complete a famous 6-2 aggregate victory. 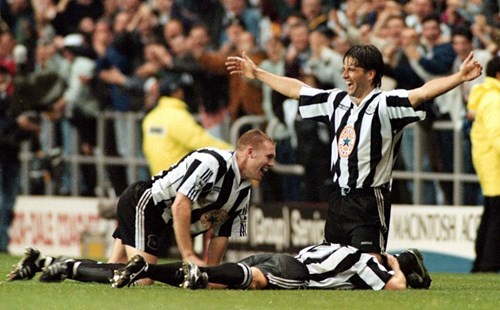 Beaten into second place in the Premier League by Manchester United in May and heavily defeated by the Red Devils in the Charity Shield in August, this was a chance for payback for Kevin Keegan’s Magpies.

In a blaze of unstoppable attacking football, Newcastle simply dismantled the champions, scoring five times without reply in front of a delirious St. James’ Park.

The first goal arrived in the 12th minute when an eagle-eyed linesman spotted that centre-back Darren Peacock’s header had crossed the line before being cleared by Denis Irwin.

On the half-hour, Newcastle doubled their lead in style. Steve Watson and John Beresford worked the ball to David Ginola on the left and the mercurial Frenchman cut inside before unleashing a searing right-footed drive beyond Schmeichel and into the top right corner.

The match was over as a contest with just over an hour played – Alan Shearer crossing for Les Ferdinand to bury a header as the Entertainers ran riot.

Shearer tucked away the fourth after Schmeichel had saved miraculously at close quarters from Peter Beardsley and Ferdinand, but the best was still to come.

Spotting Schmeichel off his line, Albert produced a moment of pure magic; executing a chip from outside the area that sailed over the stranded goalkeeper.

"If it had only been 1-0 or 2-0, I wouldn’t have tried that chip," Albert said later. "But at 4-0 there was nothing to lose and when no Manchester United player came to challenge me, I thought 'why not?' and went for it. 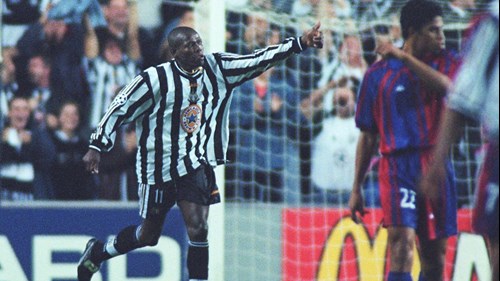 Second place in the Premier League in 1996 brought only a UEFA Cup place for Newcastle United, but when the Magpies finished second again in 1997, the rules had changed and the reward was a debut appearance in the UEFA Champions League.

After seeing off Croatia Zagreb in the Qualifying Round, United were drawn in Group C alongside Dynamo Kiev, PSV Eindhoven and FC Barcelona – and it was Barça, with Luis Figo, Rivaldo and Sonny Anderson in their ranks - who were first up on Tyneside.

While Kevin Keegan had moved on as manager, replaced by Kenny Dalglish, the performance against the Catalan giants was vintage Entertainers; United roaring into a 3-0 lead courtesy of a brilliant hat-trick from Faustino Asprilla.

His first came from the penalty spot after the Colombian had been brought down by visiting goalkeeper, Ruud Hesp. ‘Tino’ picked himself up to slam home a superb spot-kick.

His second owed much to the swashbuckling performance of winger Keith Gillespie; the Northern Irishman leaving Sergi Barjúan with twisted blood before crossing for Asprilla to bury a header into the roof of the net.

United repeated the trick in the second half as Gillespie again roared down the right, crossing for Asprilla to crash home his third of the night to a deafening roar at the Leazes End.

Down but not out, Barcelona fought back and reduced the deficit through Luis Enrique.

And despite Figo making it 3-2 in 89th-minute, Newcastle hung on for a famous victory.

Rob Lee, United's captain on the night, said: “This was one of the greatest nights in the club’s history and every player involved was proud to be part of it.

“It was one of those fabulous occasions where everyone takes away a memory, and we all knew we had been part of something special.

“Of course, Tino was the star of the show. That was the best I have ever seen him play.

"He not only scored the three goals, but he also worked very hard for the team.” 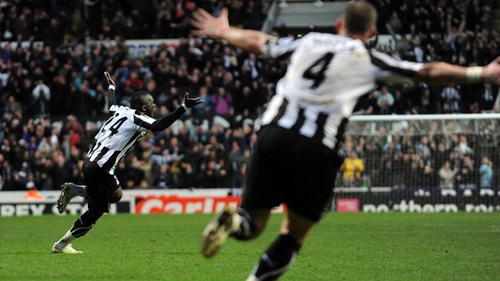 Newcastle United performed one of the greatest comebacks in Premier League history in February 2011, recovering from a four-goal deficit at half-time to draw 4-4 with Arsenal at St. James' Park.

The home faithful could barely believe their eyes as the Magpies went 4-0 down inside a disastrous opening 26 minutes; Theo Walcott, Johan Djourou and Robin van Persie (2) seemingly putting the Gunners out of sight with a little over a quarter of the game played.

Newcastle were given the faintest glimmer of hope five minutes after the restart when the visitors were reduced to ten men; Abou Diaby given a red card after a tangle with Joey Barton.

If the first 26 minutes came as a surprise, the final 21 minutes were barely believable - Barton starting the comeback late on by scoring from the penalty spot after a foul on Leon Best.

Six minutes later, the deficit was down to two; Best slamming a loose ball home from close range to make it 4-2.

The comeback was well and truly on with six minutes left when Newcastle were awarded a second penalty – conceded again by French defender Laurent Koscielny.

Barton kept his cool once again to drill the penalty straight down the middle, setting up a frenetic finish.

Amazingly, the turnaround was completed in the 88th-minute - and through one of the goals of the season.

Running onto a looping headed clearance from the Arsenal box, Ivorian midfielder Cheick Tioté sent a stunning 30-yard volley crashing into the back of the net to take the roof off the Gallowgate.

Kevin Nolan almost won it for the Magpies, sending a strike just wide of the upright with goalkeeper Wojciech Szczesny beaten, but United had to settle for what had seemed an impossible point.